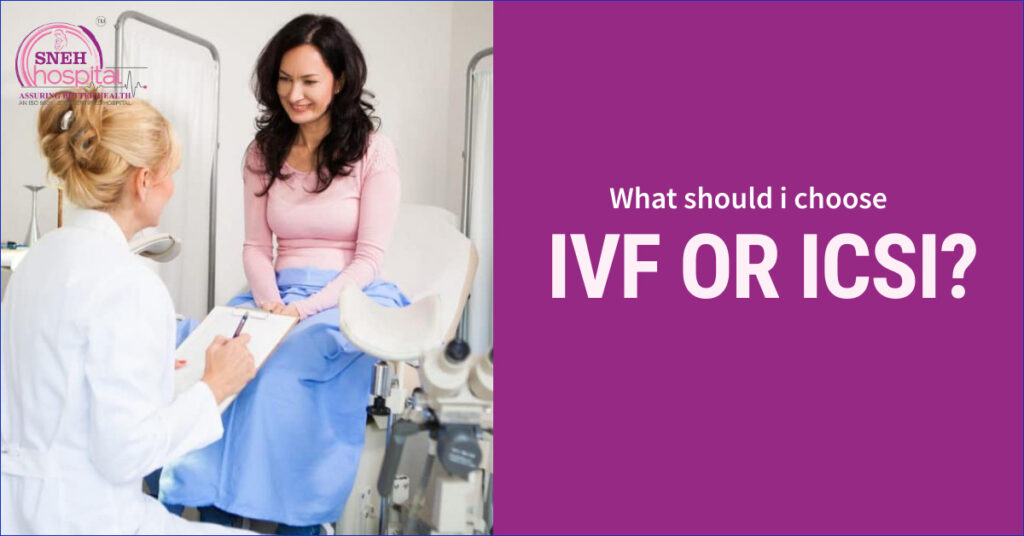 What Should I Choose- IVF or ICSI?

Are you stuck between scores of questions concerning IVF or ICSI?

Is ICSI better than IVF? Which is less risky? From both, which has high success rate? Are they both same? What is ICSI-IVF? Should I prefer ICSI-IVF?

IVF- it is an assisted reproductive process, where the sperms of male are kept with the egg of female together outside the body in culture dish or test-tube. When it results into embryo, it is implanted in the uterus of the female.

ICSI– In the ICSI process, with the help of small injecting pipette, a single sperm is injected into the egg and kept into the incubator for fertilization. Once, the fertilization occurs, the embryos are observed for 1-5 days before it is transferred to the woman’s uterus.

IVF (In-vitro Fertilization) and ICSI (Intracytoplasmic sperm injection) are the ways to conceive when couples have fertility issues. Both the methods include the insemination outside the body and subsequently, implantation of embryo in the uterus. The main difference between IVF and ICSI is the method of fertilizing the egg. In IVF, multiple sperms are added to each egg with the hope that any one of them will result in embryo. Whereas in ICSI, when male infertility factor obstructs the pregnancy because of having poor quality of sperms. Then, by making the use of microscope, embryologist chooses one sperm of the best quality. In due course, injecting that sperm in the egg to make it an embryo.

After somedays, embryologist will check on the sperm and egg. if there are multiple embryos formed then either one or two in specific case will be implanted in the uterus. The surplus will be frozen in order to use it in the later future, in case the treatment is not successful.

When is it recommended?

Which is best- ICSI Or IVF?

According to the quest on the best treatments, ICSI and IVF are equally effective. When the question is to choose the best then, it depends on the factor which is responsible for infertility. In IVF, there is formation of multiple embryos so the best embryo is selected among many. It increases the chance of successful pregnancy. Mostly, couples with infertility prefer IVF as it has greater chances of pregnancy.

When it comes to ICSI, if semen analysis shows low sperm count, poor quality of sperm, low sperm motility or else already had one unsuccessful cycle of IVF. Doctors recommend ICSI. In nutshell, when male fertility factor is the main concern. Then, ICSI is the best option. Again, ICSI has higher success rate too.

Is it safe to implement ICSI with every IVF Cycle?

ICSI-IVF is when the IVF treatment is performed by using ICSI.  Fertilization process is done in the lab so it won’t make any major difference between IVF or ICSI-IVF. Firstly, just like in IVF, you will take fertility medication for stimulating your ovaries to produces more eggs. When the enough good-sized follicles have grown, eggs will be retrieved from the them with the guided needle.

On the same day, your partner has to provide sperm sample in case you are not using donor sperm or frozen sperm. Later, embryologist will select best sperm for each retrieved egg and will inject single sperm in each egg by using microscope.

After few days under observation, fertilization will take place and the best embryo either one or two will be implanted in the uterus of the woman via catheter. It is less invasive and has higher success rate. But still doctor mostly not recommend to do that without major requirement. if you want to conceive through ICSI-IVF then you must consult doctor and align with his advice.

Risk in IVF or ICSI:

You might be thinking that IVF and ICSI is risky or else which is less risky. Then let me tell you, this whole process is performed by experienced specialists with available safe and advanced techniques by making use of safe and modern technology. Thousands of couples are framing their family using IVF or ICSI presently. It’s not like they are 100% safe or success rate is 100% but the risk in this treatment is very minor say for 4-5%. What are the risks then?

Note that, these are not all-time risks, even risk factor in IVF and ICSI is very rare, so don’t worry! You can frame your family without any second thought. It is quite possible now to conceive with no risk due to scientific breakthrough and skilled doctors with the years of experience. Don’t hesitate if you have any query, stay in touch and contact us now!