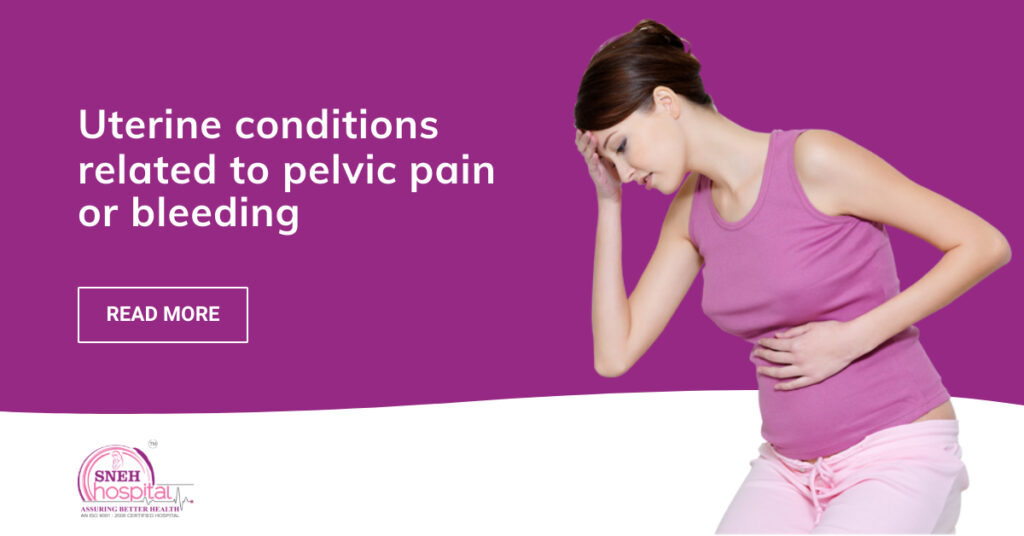 Most women ignore if they experience pelvic pain or bleeding as they consider it as normal. However, these can be the signs that something is not normal, there can be peculiar growth of the tissues inside the womb or uterus.

Uterus is the major part of reproductive system consisting of various kinds of cells. Womb is a part of body whereby a woman carries baby for nine months. So, it is quite delicate and when you feel anything unusual then the best you can do is to consult with a gynecologist. There can be some conditions that can affect the uterus,

Fibroids are non-cancerous cells that can be grown inside the uterus, outside the uterus or on the surface of the uterus. They may vary in shape and size. They can be very small and can be as big as watermelon. Women who are at child bearing age or those below 50 are at risk of uterine fibroids.

Most women don’t experience any symptoms. However, the women during reproductive age and below 50 are likely to experience some symptoms. Different women experience different symptoms such as heavy bleeding, constipation, change in abdominal size, pelvic pain, pain during intercourse, abdominal pain, increased frequency of urination etc.

Though fibroids are non-cancerous cells, doesn’t mean that they are not deadly. If they left unattended or untreated then they may cause serious condition sooner or later.

Endometriosis is a painful condition, the same kind of tissue that lines your inside of uterus grows in other parts or outside of your uterus. It can grow in the ovaries, fallopian tube, abdomen, or the tissue lining your pelvis. This can create scar tissues to form around the affected organs.

People who have endometriosis experience symptoms such as prolonged, painful and heavy periods, pain during intercourse, pelvic pain and pain in intestines, painful urination or bowel movements, abnormal bleeding or spotting etc.

Endometrial polyps are the benign cells which has abnormal growth that line the uterus and extend into the cavity of uterus. Every so often, though they are non-cancerous but can be found out as cancerous. Woman who are obese, at premenopausal or postmenopausal stage are at risk of developing endometrial polyps.

Moreover, those who takes common drug to overcome breast cancer are also at increased risk of developing polyps. The most common symptom women experience in this condition is abnormal uterine bleeding, bleeding or spotting between periods, bleeding even after menopause, painful intercourse, and bleeding after intercourse etc.

Adenomyosis is a non-cancerous condition whereby the inner lining of the uterus (endometrium) grows into the muscular layer of uterus (myometrium. These are not basically deadly and its cause is also unknown. It is usually seen during reproductive years.

Women who have adenomyosis may experience heavy or abnormal bleeding, painful and prolonged  periods, pain during intercourse, feel pelvic pressure or heaviness in pelvic region. Though they are not life threatening, but it is recommended to go for the diagnosis as it can make something serious in future sooner or later.

It is quite fathomable that women face great many challenges when it comes to reproductive health. however, with the advancement in scientific field, various conditions can be diagnosed at an early stage and can be treated before it becomes life threatening. At least once in a year, women should visit to gynecologist as a part of reproductive health care.

#Adenomyosis#Bleeding#Endometrialpolyps#Endometriosis#gynecologicaldisorder#PelvicPain#Spotting#UterineFibroidsGynecology
Gynecologist: When to Visit and What to Expect?
When Should a Woman Consider Egg Freezing?